Forgotten European atrocities in Africa: Peek into abuses and man’s inhumanity to man

This story was done exactly two years ago, it generated quite a lot of feedbacks including a charge one from Shadrack Mandela which stated thus: 'less...
Read more
Health

Bill Gates confident coronavirus vaccine will work in Africa, but Africans on Twitter not having it

Talks to have a potential vaccine for Covid-19 tested in Africa, because the number of infected people is not as high as other countries...
Read more
Health

Whether it's a matter of faulty detection, climatic factors or simple fluke, the remarkably low rate of coronavirus infection in African countries, with their...
Read more
Short Stories & Interviews

Crime against Congo: Cases against King Leopold II and Belgium

The intriguing thing about the entrance of King Leopold II into Africa is that it was not with any force or coercion; rather, his...
Read more
Nigeria News

Dear Ma, I hope this letter meets you in good health.It is with deep sense of respect that I have chosen to write to you...
Read more
Short Stories & Interviews

In many climes in Africa, women have had to struggle to rise above the perking order of patriarchal expectations.They were highly accepted among men...
Read more

Saren Idaho said he has no connection to Sierra Leone and had never been to the country until he was deported there from the US six months ago.

“I know nobody here,” lamented the 55-year-old father of two.

Looking unwell and struggling to walk, he sat down on a plastic chair in his sparsely furnished hotel room in the capital, Freetown. As he was talking he played with a pack of cigarettes and several butts were squashed in an ashtray beside him.

At least this was better than the crowded police cell, where he slept on the floor “with cockroaches, rats and bed bugs” for the first five months of his time here.

Prince Latoya, 47, was on the same deportation flight and is in the same situation.

Both men, who had never met before coming to Sierra Leone, were long-term residents of the US. But they say they were originally from the Caribbean, which the US authorities dispute.

Idaho and Latoya were expelled last August, along with 17 Sierra Leoneans, among other West Africans, who had been convicted of committing crimes in the US.

They ended up on that flight after staff at Sierra Leone’s embassy in Washington DC were put under pressure by US officials, according to Isha Sillah, director for the Americas and the Pacific at the foreign ministry here.

She said that the US immigration authorities had submitted documents to the embassy that “appeared to suggest” that the two men were from Sierra Leone. Without cross-checking, embassy officials issued them each with an Emergency Travel Certificate (ETC).

Embassy staff had told her that “what contributed to the issuance of the ETC was also pressure piled on them by the State Department and the Department of Homeland Security” to accept them as Sierra Leoneans.

“The Sierra Leone government are like puppets to the Americans,” Latoya, who said he was originally from the Bahamas, told the BBC.

Idaho was angry with the US authorities.

“America forged documents to bring me here claiming this to be my country of citizenship,” he said. “And I know I was not born in this country.

“I am from the Commonwealth of Dominica. What is so hard about returning to the US?”

This has now become a massive bureaucratic problem.

The foreign ministry has contacted the two Caribbean countries’ embassies in Washington to certify that the two men were born there.

“The Dominican embassy has denied that Idaho is their national while the Bahamian embassy says more documents are needed to enable them make a determination – hence it’s inconclusive,” Ms Sillah said.

Meanwhile, they are stuck in limbo in the hotel.

The manager, Osman Kamara, said the men were checked in by the police with an advance payment for their lodging, but that ran out and an anonymous businessman stepped in to pay the bills to stop them being thrown out.

He also paid for a food and clothing allowance.

Before that, they were each getting $2.50 (£2) to cover daily costs, which they said barely paid for breakfast and bottled water.

“We have been living here with no food, no medical care, nothing,” Latoya said.

The two men had been receiving extra money from relatives sent through Western Union. But as their Sierra Leone travel documents have now expired, they can no longer pick up the cash as a valid photo ID is required.

Idaho said he had been living in the US for 28 years until he was arrested and jailed in 2018 for driving while drunk.

He has lost all his ID documents. They were in a house that was seized by the bank as he was unable to pay the mortgage because he was imprisoned, he said.

“All my possessions, including my birth certificate, are locked in a store somewhere after the takeover of the house,” he told the BBC.

His wife of 17 years, Mowanda Idaho, and his two sons, aged 14 and 11, are now living in the US state of South Carolina.

“It has been devastating for me and the two boys with the 14-year-old now living in a state of depression and failing in school,” Ms Idaho, who is an American citizen, said by phone.

She last saw him for “a five-minute encounter” when he was taken to prison in April 2018.

She had spoken to an immigration lawyer who told her that he had heard nothing like her husband’s case before. But she says she cannot afford the legal fees to take the authorities to court.

Latoya, who had lived in the US for 25 years, was convicted of identity theft. He said he had no wife or children.

‘They said they were from Sierra Leone’

But the US government sees things differently.

In an email to the BBC, the Department of Homeland Security (DHS) described Latoya as a “criminal alien who has been convicted of multiple identity theft-related criminal offenses”.

It said that he entered the country illegally in 1997, and “on numerous occasions, Latoya stated to US immigration officers that he was a citizen of Sierra Leone”.

The Sierra Leonean embassy in Washington confirmed his citizenship, the DHS said. 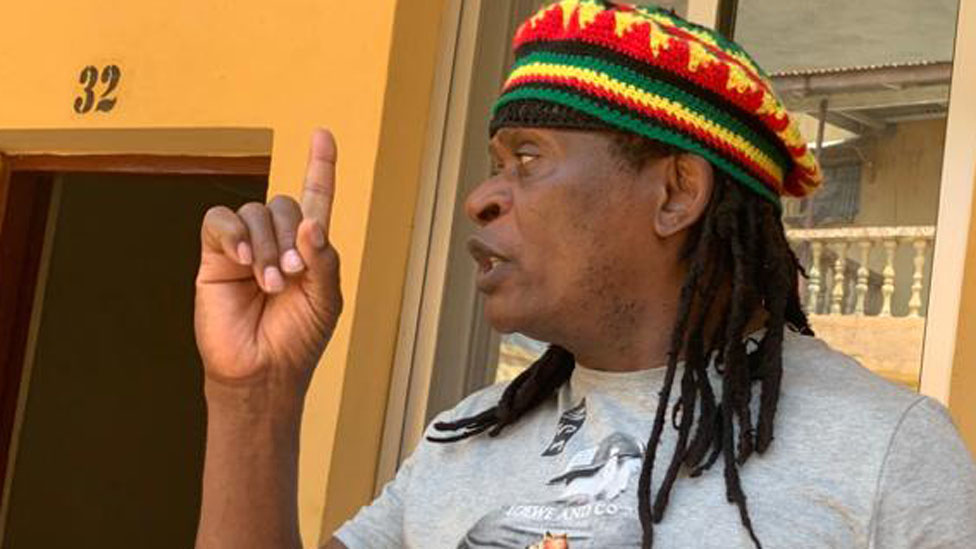 Latoya vehemently denied that he had made any claim to being from Sierra Leone.

“I never told then I was from Sierra Leone,” he said.

“I don’t know where they got this idea from. I went [to the US] by boat from the Bahamas. Ask them to produce anything that said I claimed Sierra Leonean citizenship.”

The US authorities also called Idaho “a criminal alien”, who entered the country in 1999, adding that he had “multiple convictions for driving under the influence of alcohol”.

He had told the immigration officials that he was from Sierra Leone, according to the email from the DHS.

“I never claimed Sierra Leonean citizenship,” Idaho said in response. “I don’t have a multiple criminal record. I have only one conviction for driving under the influence of alcohol.”

As for the idea that the US authorities pressurised the Sierra Leonean embassy into issuing travel documents, the DHS is adamant that this did not happen.

In fact, it said that “Sierra Leone has a history of refusing to issue travel documents for its citizens”, a situation which put the country under temporary US visa sanctions in 2017.

But the government here does not think the men are Sierra Leonean. It had wanted to fly the two men to the Caribbean, but without confirmation of their citizenship it now hopes to hand them over to the International Office for Migration (IOM).

The IOM chief in Sierra Leone, Sanusi Savage, said that his agency had not received an official request. He said he had only received phone calls from foreign ministry officials including from the minister, Nabilla Tunis, to help.

“I promised to support them with tickets but upon producing official travel documents and acceptance of their countries of origin,” he told the BBC.

But that has not happened yet and the two men continue to live at the mercy of bureaucratic bickering.

Twin attacks believed to have been carried out by rebel fighters in Central Mali, have left at least five soldiers dead, amid political crisis...
Read more
West Africa

French soldier dies in an accident in Chad

A French soldier has died during a maintenance operation in Chad after a piece of equipment exploded, the defence ministry said in a statement...
Read more

A suspected grave vandal was rescued by the police in South Africa, after apparently spending two days buried up to his waist in a...
Read more
Lifestyle & Society

Woman 62, to spend 35 years in jail for violent robbery

A 62-year-old female carjacker, will spend the next 35 years behind bars after being convicted of robbery with violence by a Law Court in...
Read more
East Africa

Some 24,000 health workers in South Africa have contracted the coronavirus, 181 of whom have died, since the pandemic hit the country in March,...
Read more

A suspected grave vandal was rescued by the police in South Africa, after apparently spending two days buried up to his waist in a...
Read more
Lifestyle & Society

Woman 62, to spend 35 years in jail for violent robbery

A 62-year-old female carjacker, will spend the next 35 years behind bars after being convicted of robbery with violence by a Law Court in...
Read more
East Africa

Some 24,000 health workers in South Africa have contracted the coronavirus, 181 of whom have died, since the pandemic hit the country in March,...
Read more
Southern Africa

Nigeria's largest airline Air Peace said on Tuesday it had laid off a number of pilots and cut salaries in order to cope with...
Read more
North Africa

Three key Nile basin countries on Monday resumed their negotiations to resolve a years-long dispute over the operation and filling of a giant hydroelectric...
Read more
Southern Africa

Twin attacks believed to have been carried out by rebel fighters in Central Mali, have left at least five soldiers dead, amid political crisis...
Read more
West Africa